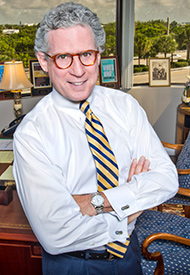 Attorney Gary D. Weiner has been practicing law in Florida for 33 years. He limits his practice to the area of family law, including dissolution of marriage, child custody, child and spousal support, and post-judgment issues of modification. He is an experienced mediator and litigator able to provide the representation clients need based on their unique circumstances.

Mr. Weiner earned his law degree from Nova Southeastern Law School, where he served as Chief Advocate of the Moot Court Society and was named to the Who’s Who of American Colleges and Universities. After law school, he was lead trial associate for famed attorney Henry B. Rothblatt who together with F. Lee Bailey authored the landmark Criminal Law Library for West Publishing Company.

In 1994, Mr. Weiner was appointed by the Chief Judge in Broward County, Florida to serve as a Traffic Court Magistrate Judge. He retired as a Magistrate in 1997 to concentrate solely on his family law practice. In 2000, he was named to the National Register’s Who’s Who of Executives and Professionals. Mr. Weiner is rated AV® Preeminent™ by Martindale-Hubbell®, the definitive guide to the most distinguished law firms and attorneys in America. Mr. Weiner was named to Florida Trend Magazine’s Legal Elite in 2010 and 2011, representing the top 1% of practitioners in Marital and Family Law in the State of Florida.  In 2015 and 2016 Mr. Weiner was selected as a Super Lawyer in the area of Family Law by Super Lawyer Magazine .